I know, where the heck have you been, Jason? So much has happened in the last two weeks and I promise on a stack of empty Snicker Bar wrappers that I'll give a full update shortly.

Tomorrow I'm planning our best edition ever of Jason's Cheesy Web Videos, filmed right here in NOLA. Then it's off to Arizona, Utah, and home!
Posted by Jason Wright at 10:49 PM 10 comments:

Another fun interview with Glenn Beck

Our fourth interview with Glenn was such fun. We were in the makeup room together beforehand and had an fascinating discussion about Hurricane Katrina and how it was used against him in the media. Glenn is as personable and kind off-screen as he is on-screen. So did you miss it? Watch below! 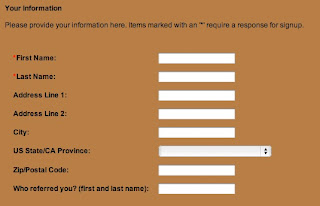 My agent will probably accuse me of not getting enough sleep on tour, but I've come up with a fun idea for a new contest. I've decided to give away signed copies of my first four books plus a free copy of every book I write for the rest of my career!

Three winners will be chosen at random on November 1st and all three will receive a signed and personalized copy of The James Miracle, Christmas Jars, The Wednesday Letters and Recovering Charles.

But wait! As Billy Mays says, "That's not all!" All three winners will also receive a free copy of every book I ever write in both hardcover and paperback.

How do you enter?

STEP 1: Send your friends and family an email referring them to RecoveringCharles.com.

STEP 2: In that email, invite your friends and family to join our list on the front page so they can learn more about the novels, win prizes, and hear Cherie Call's new song "Love Me If You Can". All for free!

STEP 3: Instruct your friends to enter YOUR name as their "referrer" in the field at the very bottom. (picture of sign-up form as shown above)

For every person who joins our list and enters YOUR name, you'll receive one entry in the drawing. Simple enough?

Remember, the deadline is November 1st to refer those friends. And of course once your friends are on the list, they can enter too!

Did you miss our last drawing of this kind? Click here to watch it here.

WANT TO SEE A SAMPLE EMAIL TO SEND YOUR FRIENDS?

Hi friends! I'm participating in a contest to win free books for life. An author named Jason Wright has a new book in stores with a beautiful theme song by songwriter Cherie Call. It's about second verses in your life and I know you'll love it!

You can hear it for free right now at http://www.recoveringcharles.com

I hope you'll visit the site and join his email list. He won't SPAM you (I promise!) and you'll be the first to hear about events, contests, and even get sneak peeks at his manuscripts.

And be sure to check out his latest contest and enter MY name as your referrer when you sign up! That's how I hope to win his books for life :)
Posted by Jason Wright at 12:48 AM 10 comments:

Labels: cherie call, jason wright, love me if you can, recovering charles

Greetings from New York and a Glenn Beck update 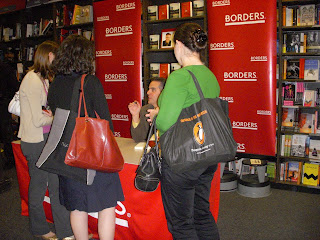 What a crazy 24 hours! I'm so tired I actually fell asleep this afternoon in the back of the car that drove me from Manhattan to my hotel in Long Island. I haven't done since I rode in a car seat! Wow, I am getting way too old for this...

Last night's signing was great fun. There was a moment I looked around the bookstore (Borders in the Time Warner Building) and couldn't believe I was actually there. I remember once going into that store during a visit to CNN. It was long before my books were available nationally and I wondered if I'd ever be able to buy my book there. Then last night I was reading from my books and signing them. Surreal.

You might have watched Glenn Beck last night and noticed I wasn't on. Sorry! I meant to post a note that we only taped yesterday, the actual interview will air Thursday at 7PM and 9PM EST. With all the financial news dominating the landscape they thought it was best to hold the segment a day or two. So tune in tomorrow!

Finally, I am pleased to present Episode 2 of Jason's Cheesy Web Diary. Live from New York, it's Jason on Times Square!

Posted by Jason Wright at 3:28 PM No comments:

Is it really September 16th already?

Seems like just last week I was locked up in a Holiday Inn Express cranking through Recovering Charles as my deadline barreled down on me. Now here we are just 5 short months later on release day.

Can you say, stressed?

I often get asked what it feels like on the day a new book hits store shelves. I usually say it feels like giving birth. Then my wife, if she's standing nearby, elbows me sharply in the ribs and says "You have no clue what you're talking about..." And, as usual, she's probably right.

Maybe it's like dating a woman for a long time and facing the moment of truth: The proposal. There you are on one knee in Central Park, or on the beach, or in a hot air balloon, or in a department store (that was me, true story). You've waited for this big moment. It's a huge commitment. You know she likes you, but will she love you? You're about to put it all on the line, to open yourself up more than you ever have to acceptance or rejection. Will she say yes? If she does it's bliss. If she doesn't, well, it stinks.

Maybe it's more like opening a restaurant. On opening night you know you'll have a big crowd. But will they like your entrees? Will the chocolate lava cake be lava-ey enough? You've worked so hard for this big day. If they like it, you know they'll tell their friends and come back. If not, well, you'll never cook in this town again.

In any case, pick your analogy and then pick up a copy of Recovering Charles online at Barnes & Noble, Amazon, or your local bookstore. And most importantly, come back and tell me what you think. Good, bad or indifferent.

Now excuse me while I get my gown on. Contractions are just two minutes apart...
Posted by Jason Wright at 12:01 AM 4 comments:

Wednesday is definitely my favorite day 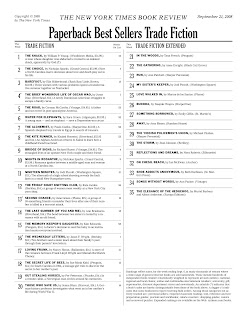 We just learned that The Wednesday Letters has landed at #16 on the NYT Paperback Bestseller list. Wow! I'm so thankful to all of you that bought an extra case :)

The NYT list for the coming week is always released on Wednesday afternoons. How appropriate, eh?
Posted by Jason Wright at 7:20 PM 6 comments:

Overstock.com is doing a special Wednesday Letters promotion and giving away 25 signed copies of the new paperback. It's free and easy! Click here to enter.
Posted by Jason Wright at 2:35 PM No comments:

Just about the most fun I've ever had on stage

I have always wanted to thank my wife for being such a trooper about my ridiculous travel schedule. I finally had a chance in Sacramento yesterday at a Time Out for Women event. Everyone was such a good sport about it! Watch the short clip below:

Thanks to everyone for making that such a fantastic day!
Posted by Jason Wright at 10:17 PM 13 comments:

Labels: sacramento, time out for women

My publisher, publicist and agent have been encouraging me to do short web videos for quite a while. I wonder if they'll still feel that way after watching Episode #1?