Wright Words: The Power of Praise

I was in the third grade when I first realized I wanted to be a writer when I grew up.

My teacher, the lovely and kind Mrs. Sampson, took time on a Friday afternoon to teach us the format for writing a skit and we were assigned the simple task of drafting a one-page conversation between two characters. Character name on left, dialogue on right, easy enough.

By the time the bell sent us scrambling to the buses, mine was five pages long. I handed it to Mrs. Sampson and stood on the toes on my dirty Converse tennis shoes, elbows resting on the edge of her desk, eyes locked on her face and tuned in for any reaction.

The play, no longer just a skit, was titled Molly and Polly. It was a gripping, thrilling adventure starring two leather-jacket-motorcycle-riding bunny rabbits whose mission was to cruise the countryside and solve crime.

When Mrs. Sampson finished, she looked up at me with her wise eyes and said sweetly, "Jason, this is really good. You should do more of this."

To say a light bulb popped on in my head would be too understated. It was more like a mushroom cloud, but without the long nuclear winter.

I went home that afternoon, barricaded myself in my room, and channeled Shakespeare all weekend long. I pumped out one Molly and Polly adventure after another, appearing downstairs only long enough for a quick trip to church and refills on Little Debbie Oatmeal Cream Pies and milk.

When Monday morning arrived, I staggered out of my bedroom in a robe with three days of an imagined third-grade beard and smelling an awful lot like my socks. Later, still glassy-eyed, I strolled Mrs. Sampson's classroom and with a giant heave plopped a stack of plays of her desk. "Here you go!" I said. "Will you read these?"

"It's a whole series of Molly and Polly plays. You told me to do more of this."

She looked at me so kindly, with so much love in her eyes, and said, "Oh, Dear. I didn't mean so soon."

And that was the beginning. I submitted my first manuscript for publication in 1982. I was 11. A few weeks later I received a postcard from Random House thanking me and saying my manuscript had been received and was under consideration.

I walked with serious swagger around middle school for a month telling people I had a manuscript under consideration at Random House. Girls were impressed, boys jealous, and teachers unbelievably patient. Each adult wished me well and told me that no matter what, they believed in me.

I still have that postcard today. It is a cherished memory of a dream-filled childhood.

What I don't have is a rejection letter. I don't recall ever receiving one. Perhaps I did and blocked it out in the shadows of ambition. Maybe, but I prefer to think I never got one because it's still under consideration.

Five years later my father died. I coped by wearing his old London Fog overcoat and writing poetry. Bad poetry. Poetry so lousy it literally pains me to read it today. But while none of it was very good, all of it was instrumental in helping me feel whole again.

After a poetry unit in Mr. Seaman's eleventh grade English class, I handed another thick stack of work to my teacher and asked if he'd read them. A week later he handed them back in a manila folder.

"What did you think?" I asked.

"Some of them are quite good, Jason, you should really consider publishing these someday."

I raced home after school and announced, "Mother, my English teacher says I should publish a book of my poetry."

Getting Mom's support was the easy part, but getting a publishing deal for a volume of bad poetry proved impossible. Thankfully it didn't take long to convince my mother/agent/editor the only path to publication was doing it ourselves.

So during the summer of 1988 I laid out the book, took moody black and white photos to accompany the lousy poetry, found a local printer, and together we made history.

I'll never forget calling the local newspaper and TV station and in a well-rehearsed New York accent saying, "Hey guess what, there's a kid in town, I think he's 17, anyway he's got a book of poetry coming out, can you believe it? He's just a kid! You might want to do a story."

24-hours later I was on the 6:00 PM news and on the front page of my local paper. By the end of the week I'd supplied copies of my writing debut, Sitting on the Dock, to all the local book and gift shops.

All because a third-grade teacher on a random Friday afternoon said, "You should do more of this."

The journey since has been anything but a straight line to success. There have been failures, some of them colossal. There have been successes, all of them gratifying and humbling. But no matter what, at every step along the way, there has been someone to say: "You can do this, you have potential, keep trying, I have faith in you, I believe in you, you should do more of this, it's fine to make mistakes because I'll be there to help you do it better next time."

Too many of these positive influences have drifted out of my life, across the country, across the universe or across the divide from this life and what awaits. Today I'm left with memories of their faith and with a charge to believe in others as much as they believed in me.

You should do more of it.
Posted by Jason Wright at 5:22 PM 9 comments:

Win an ARC of The Seventeen Second Miracle 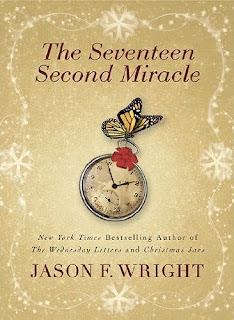 There are a few key moments in the publication of a book that are exciting milestones for an author. One of those is the day the advance copies land on your doorstep. It's not the final book as it will later appear in stores around the country, but it's pretty darn close. These advance reader copies or ARC's are meant to plant seeds, encourage a nice blurb or two, and generally build buzz.

A few days ago a box arrived on doorstep containing a small stash of ARC's of my fall title, The Seventeen Second Miracle. It's a thrill to see the cover and know we're that much closer to the release on September 28th.

So, want to win the first signed copy?

In the comments section below, tell me why you deserve a free book. Be creative, funny, whatever! There is only one rule, your entry must be exactly 17 words long. Please also include your name and city/state.

Winner will be announced Monday July 26th. Good luck!
Posted by Jason Wright at 10:34 AM 57 comments:

Are you filling a Christmas Jar in 2010?