Well that was a nice break at home! Kodi and I returned Wednesday evening, recovered Thursday, and Friday morning I got up at 4:00 to head back to the airport for a flight to L.A. for the annual Book Expo America show. It's the Super Bowl of book conventions with authors, publishers, movie reps, agents, etc.

Quite a few awards are given out dring the week, and we just learned that The Wednesday Letters won the Ben Franklin Award for Audio Book of the Year in the fiction category. Congrats to Art Allen! He's the actor who did the audio performance.

Yesterday I met with folks from Penguin about their paperback plans for The Wednesday Letters. They've got big plans for the August 26th release and it will be interesting to see how they differ in distribution and PR from my hardcover publisher. It's all such a fantastic learning experience.

Today's my official signing of the advance reader copies of Recovering Charles. (1:00-2:00 PM, if you're at BEA) I look forward to hearing reactions from folks; it's always a bit nerve wracking! You can count on about 8 fingers the number of people who've read the book thus far, but that will change in a hurry after today and it's pins and needles waiting to hear feedback.

Finally, I have to post two pictures from Peru. Kodi took these and they might be my favorite from the whole trip. The first was taken as we approached Machu Picchu, the second from just inside the ruins. I love the tree in the second photo. Looks like the tree of life, eh? 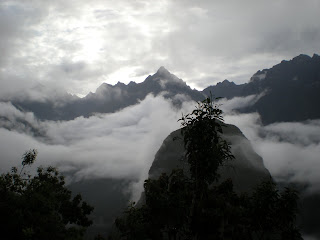 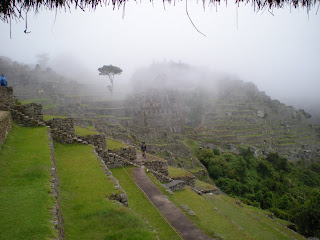 Winding down from Peru 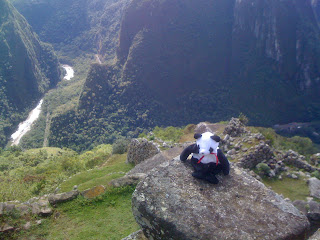 Terribly sorry I haven't been able to post more during our trip. Internet access was actually OK most of the time, but I simply didn't have much time to sit and breathe, much less write!

Right now I am sitting in the amazing lobby of the Libertador Hotel in Cusco. It's a fantastic hotel by any standards. I'll try to post video later.

We leave in an hour for the airport to return to Lima. We'll spend the day seeing the sights before heading for the airport this evening and flying home at about midnight. I'll be home in VA in time to greet my kids as they get off the bus tomorrow. Can't wait! I've missed them terribly.

So many unforgettable memories from this trip. People and images I will never forget. I promise to post more - including photos - when I'm home.

Quick not about the panda. I take him everywhere I travel and always send back pictures of his adventures to my wife and kids. In this case, of course, just the kids. This panda has seen his share of excitement, that's for sure! In this pic, Panda is sitting atop the west side of the ruins at Macchu Picchu overlooking the river. 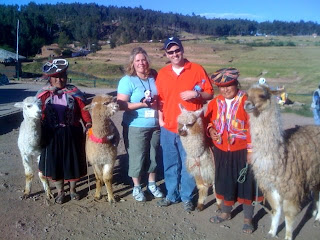 Hola! Kodi and I are safely in Cusco and having a grand old time. Today we see a few more sites near the city and then take a train to Aquas Calientes, the "base camp" - for lack of a better term - for Machu Picchu. Aguas Calientes is probably my favorite little city on the trip. It's tucked tightly between two huge mountain ranges and the houses and hostels are built literally right against the sheer mountain faces.

Here's a photo from yesterday. If possible we'll post again tomorrow after our adventure to Machu Picchu. It's truly one of the most magnificent things I've ever seen, and I can't wait to share it with my wife and a whole new group of travelers.

Adios!
Posted by Jason Wright at 8:59 AM No comments: 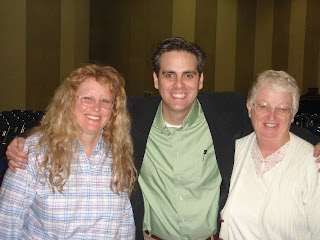 What a week! I'm frantically trying to get packed and ready to leave for Peru on Wednesday morning. I'll try to check in from the road; we'll see how well I'm able to connect.

My wife Kodi is coming along this year. Thank goodness for grandmothers! Kodi's mom has flown in to watch our four little vandals while we're gone.

Also, I'm embarrassed it's taken me so long to say this, but thanks, thanks, thanks to the many wonderful women who attended the Time Out for Women conference in San Diego last weekend. We had such a great time and I fell in love with your fantastic city.

Most of all I'm so glad I able to see my Aunt Annabelle and crazy Cousin Cheryl. (pictured) Thanks for coming! It's always nice to look out at a crowd of 1,000 faces and see one or two you actually recognize :)

San Diego was my last event of the TOFW spring schedule. This fall I look forward to meeting thousands more wonderful folks in Nashville, Sacramento, Portland, San Antonio, Springfield, and St. Louis.
Posted by Jason Wright at 3:25 PM No comments:

Moments ago I posted the long-awaited, much-teased sneak peek of the new novel, Recovering Charles. My fabulous editor is frantically editing so they can go to press with a few thousand ARC's tomorrow. (ARC's are Advance Reading Copies. These are sent to reviewers, book store buyers, managers, newspapers, VIP's etc. They're paperback and are produced quick and cheap.)

So without further ado, click here to read the Prologue, Chapter 1, and a snippet of Chapter 2. I hope it whets yer whistle!

I'm off to a Time Out for Women Event in San Diego. I can't wait to leave my Virginia allergies at the airport...
Posted by Jason Wright at 11:12 AM 4 comments:

So here's the scoop. Have you heard about the sold out Stadium of Fire event in Provo, Utah on July 4th? This is a huge annual extravaganza, even without Miley Cyrus. Throw in the fact that Glenn Beck is emceeing and you have one of this summer's hottest tickets.

And I have four of them! (and they're great, great seats)

Guess what? I'm going to give them away. No strings, no purchase necessary, no see stores for details, and no some restrictions apply must be 18 to enter nonsense.

The question is, how?

Traditional drawing? A video drawing like I did last time with my kids? A letter writing contest?