This post begins the telling of one of the neatest stories in our lives. For those of you who have read The Cross Gardner, you will recall where they discuss an apple called the Ginger Gold and the story of how it came to be. For those who haven't had a chance to read the book, this will mean much more to you when you do. But in the meantime, here is one of the references from The Cross Gardener:

We chatted on the way about the history of apples in Virginia and how I ended up an orchardist. He was interested in the decision making Scott and I went through after Father’s death. Curious how often I saw my brother. Interested in Tim and whether I thought he might have ended up on the orchard someday.

The Cross Gardener had a way of making everything I said interesting. In his presence my stories and ideas were important. A rare talent, I thought.

“Here we are.” I pulled into the driveway and stopped just shy of the fence.

“Great fence,” he said. “I love picket fences. You build it yourself?”

We got out of the truck and I led him down the closest row of apple trees. “There isn’t much to see by way of fruit, obviously, because the harvest is over.”

He reached down and picked up a rotting apple. “Why are there some on the ground?”

“If it’s a mature apple, which that one is, it probably fell during harvest. That happens a lot. Or it could have just fallen from an apple bin. That happens, too.”

“How long can it sit on the ground before it starts to rot?”

“Not long in Valley heat, that’s for sure.”

“And you don’t go by and pick them up?” He placed the apple back on the grass.

“Not usually. They can bruise if they fall. And no one wants a bruised apple.” We walked to another row.

“Are all these trees the same?”

“No, we try to alternate rows. A lot of orchards do. That first
row was Red Delicious. These are Ginger Golds.”

“Ginger Golds. So those aren’t red, one assumes?”

“One assumes correct.” I smiled. Standing there and looking at his curious eyes, almost childlike, I realized that I hadn’t told anyone about my favorite type of apple, or why it was my favorite, in a very long time.

“Ginger Golds are special.” I looked to the end of the long row of appleless trees. “They’re also the first we harvest. These were picked before Emma Jane, my wife, died.”

“I see why they’re your favorite then.”

“It’s not just that, they’ve always been my favorite apple. The Ginger Gold is a result of Hurricane Camille back in the sixties. Nineteen sixty-nine to be exact. The hurricane about washed away the orchard of a man named Clyde Harvey. Almost nothing left but devastation. Some time later when they were saving what trees they could, they came across a tree Mr. Harvey hadn’t ever seen before. It produced a yellow fruit instead of the red on the other trees around it. Eventually they planted more of them and he named it for his wife, Ginger.”

“What a miracle that something so sweet, something that brings joy to many, came from something as tragic as a hurricane. That’s lovely. One of the sweetest things I’ve heard.”


Back at the end of March the Barnes and Noble in Charlottesville, VA held a discussion and book signing for The Cross Gardner. 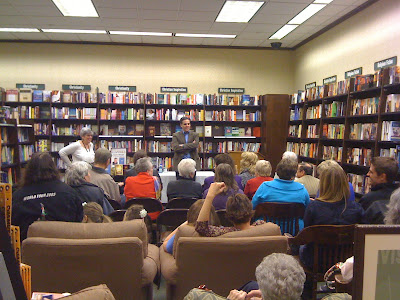 Among those in attendance were three very lovely and special ladies: Ginger, Gayle and Debbie Harvey.

Now let me tell you a little bit about these amazing ladies. Ginger Harvey is a beautiful woman inside and out. She is married to the late Clyde Harvey and has two equally beautiful daughters, Gayle and Debbie.

The Harveys owned an orchard in Central Virginia for many years. During their time in the apple world they experienced something not many ever do. They nearly lost the entire orchard to the floods brought on by Hurricane Camille.

There was much tragedy in their little valley, but as they began the recovery process they found a young tree that was not familiar to them. It turns out the tragedy of the floods had brought them a special "Gift from God," as Ginger likes to say. The Harvey family was blessed with a one-of-a-kind tree produced entirely by God and Mother Nature. It yielded a beautiful, tasty apple which later became known as the Ginger Gold.

After meeting the Harveys at the book signing we were eager to spend some time with them. Just last week Gayle and Ginger made the drive up to the Valley to see the orchard that inspired the story. 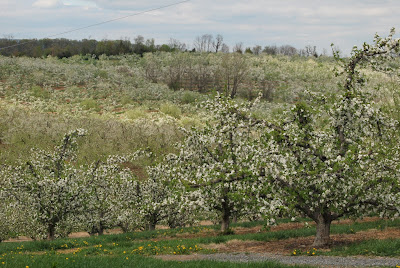 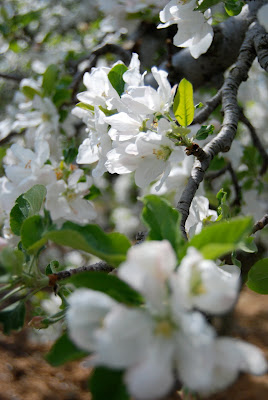 Meet Tracy, the talented orchardist who shared his knowledge with Jason. 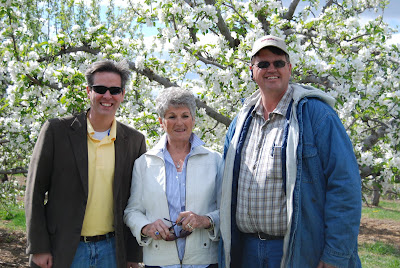 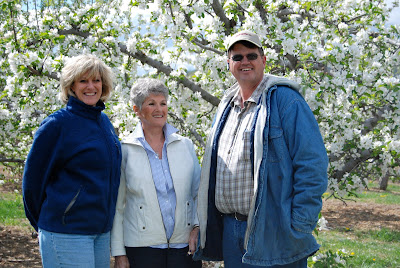 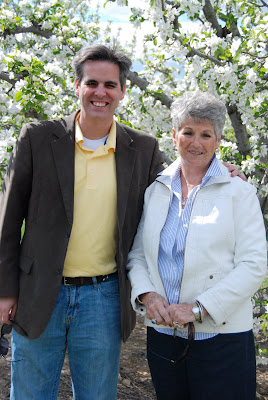 After saying goodbye and sending them on their way, Jason and I kept saying to each other, "How cool is it to meet someone who has an apple named after her growing right now on trees all around the world?"

We feel so honored to know them and we look forward to a long and fruitful (LOL) friendship.
Posted by Kodi at 4:28 PM