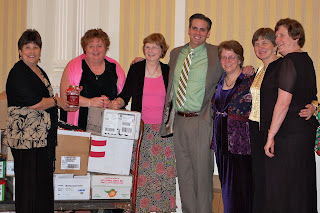 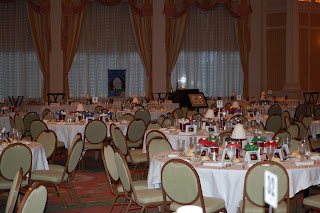 I had the privilege of speaking on Saturday (3/28) at the Virginia Alpha Delta Kappa convention at the Homestead Resort in Hot Springs, VA. The dinner gala's theme was "Jars of Giving" and everyone who attended received a copy of Christmas Jars and a decorated mason jar with a Christmas Jars label. All were challenged to go home and begin filling the jar immediately. Everyone accepted!

The evening was truly fantastic and the 330 attendees embraced the origin and miracle of the Christmas Jar with all their hearts.

But the most amazing part of the evening wasn't on the agenda. With no planning at all, after my remarks, one of the organizers stepped to the podium and asked if I thought it would be OK to give the evening's donations to the families of two employees that were shot and killed at the resort just a week earlier. "Wonderful idea," I said. The rest agreed.

Jars were filled throughout the evening, and by the next morning the ladies of ADK had raised over $3,000 in cash and divided it between two jars. Yesterday morning the jars were presented to the GM of the hotel. He accepted them on behalf of the entire Homestead family with tears in his eyes. The jars were given to the two families earlier today.

Then moments ago I received the following email. It put tears in my eyes. It just might do the same for you.

I am not very good at writing these, but my father was murdered last week along with another employee at his place of work. I was attending the viewing of the other employee killed when the GM of my hotel approuched me and handed me one of these jars. Inside was over $1500 that a fraternity had collected who did not even know who we where. Also included was an autographed copy of Christmas Jars.

I do not have words and only hope that one day when things are better I can do the same for someone else who is going through a hard time. Thank you.

Michael, to the contrary, I think you found the perfect words. We will all be praying for your family.
Posted by Jason Wright at 7:39 PM